The most important CEOs in the region 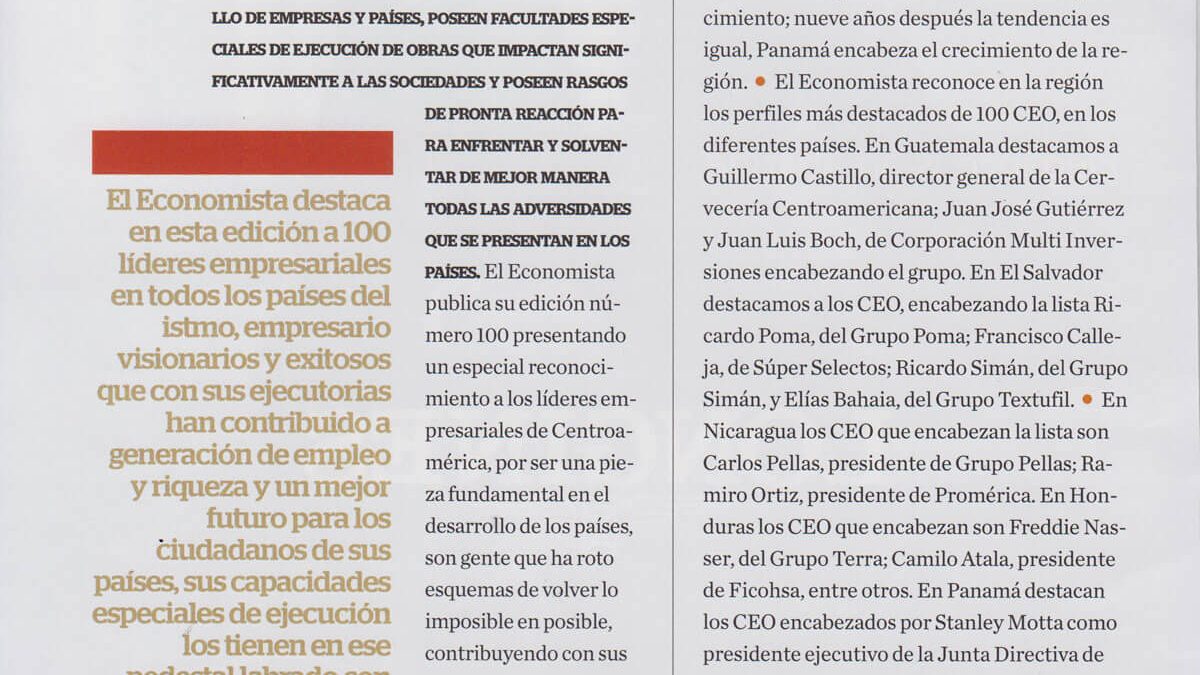 Successful entrepreneurs are visionary and enterprising people, leaders who promote the development of companies and countries, have special powers to execute work that significantly impacts societies and have quick reaction features to face and better solve all adversities that arise in countries.

El Economista publishes its 100th edition with special recognition of the business leaders of Central America, for being a critical piece in the development of the countries of the region. They are people who have changed paradigms by turning the impossible into possible, and by contributing with their work to build a better environment and future for the inhabitants of their countries.

El Economista Regional en Centroamérica was published for the first time in November 2007. José Roberto Dutriz, president of Grupo Dutriz, spoke about the integration of the countries of the isthmus, making a call to unity using organizations such as SICA. In that first edition, the Panamanian economy was the best graded in the areas of investment and growth. Nine years later, the trend is the same: Panama leads growth of the region.

El Economista recognizes the most outstanding profiles of 100 CEOs in the region, in the countries of the region. In Guatemala we highlight Guillermo Castillo, Director General of the Central American Brewery; Juan José Gutiérrez and Juan Luis Bosch, from Corporación Multi Inversiones leading the group. In El Salvador we highlight a list of CEOs headed by Ricardo Poma, of Grupo Poma; Francisco Calleja, from Super Selectos; Ricardo Simán, from Grupo Simán, and Elías Bahaia, from Grupo Textufil.

In Nicaragua, the CEOs that head the list are Carlos Pellas, president of Grupo Pellas, Ramiro Ortiz, president of Promérica. In Honduras, the CEOs who lead are Freddie Nasser, from Grupo Terra; Camilo Atala, president of Ficohsa, among others. In Panama, the outstanding CEOs are headed by Stanley Motta, Executive President of the Copa Airlines Board of Directors and other companies; Federico Humbert, president of Banco General, among others.

In Costa Rica we honor the CEOs headed by Ernesto Castagnaro, CEO of BAC Credomatic; and Pablo Bargas, CEO of Grupo Britt; we finished with the 3 regional CEOs in telecom; Seon Hyun Lee, president for C.A. and the Caribbean of Samsung; and Leo Leiman, president of Nestlé in C.A.