CMI aims to be the renewable leader 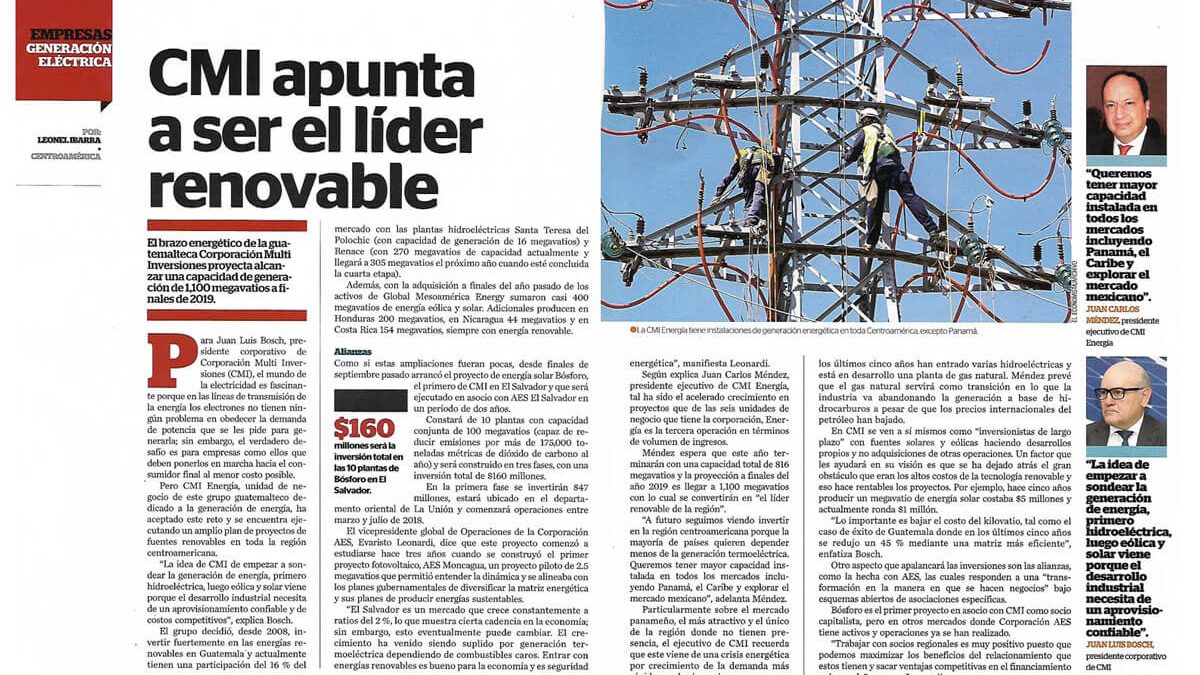 “The idea of ​​starting to probe the field of energy generation, first with hydroelectric plants, then wind and solar, comes from the fact that industrial development needs reliable supply” (Juan Luis Bosch, president of CMI)

The energy arm of the Guatemalan Corporación Multi-Inversiones plans to reach a generation capacity of 1,100 megawatts by the end of 2019.

For Juan Luis Bosch, corporate president of Corporación Multi-Inversiones (CMI), the world of electricity is fascinating because in power transmission lines, electrons have no problem in responding to power demand. The real challenge is for companies who commission plants and deliver energy to the end consumer to be able to do so at the lowest possible cost.

But CMI Energy, a business unit of this Guatemalan group dedicated to power generation, has accepted the challenge and is executing a broad plan of renewable source projects throughout the Central American region.

The group decided, in 2008, to invest heavily in renewable energies in Guatemala and currently has a 16% market share with the hydroelectric plants Santa Teresa del Polochic (with a generation capacity of 16 megawatts) and Renace (with a capacity of 270 megawatts) currently.  It will reach 305 megawatts next year when the fourth stage is completed).

In addition, with the acquisition, at the end of last year, of the assets of Global Mesoamérica Energy, they added almost 400 megawatts of wind and solar energy. Additionally, they produce 200 megawatts in Honduras, 44 megawatts in Nicaragua and 154 megawatts in Costa Rica, always with renewable sources.

As if these expansions were few, since the end of last September, the Bósforo solar PV energy project started, the first of CMI in El Salvador and which will be executed in partnership with AES El Salvador in a period of two years.

It will consist of 10 plants with a capacity of 100 megawatts (capable of reducing emissions by more than 175,000 metric tons of carbon dioxide per year) and will be built in three phases, with a total investment of $160 million.

In the first phase, $47 million will be invested. The plants of the first phase will be located in the eastern department of La Unión and will begin operations between March and July 2018.

The global vice president of Operations of the AES Corporation, Varistor Leonardi, says that the studies for this project began three years ago when the first photovoltaic project. AES Moncagua was built as a pilot 2.5-megawatt project that made it possible for Managua to understand the dynamics and was aligned with government plans to diversify the energy matrix and its plans to produce sustainable energy.

“El Salvador is a market that is constantly growing at rates of 2%, which shows a certain cadence in the economy; however, this may eventually change. Growth has been supplied by thermoelectric generation dependent on expensive fuels. Entering the sector with renewable energy is good for the economy and contributes energy security”, says Leonardi.

According to Juan Carlos Méndez, executive president of CMI Energy, such has been the accelerated growth in projects that of the six business units that the corporation has, Energy is the third operation in terms of revenue volume.

Méndez expects that this year they will close with a total capacity of 816 megawatts and the projection by the end of 2019 is to reach 1,100 megawatts, with which they will become “the renewable leader in the region.”

“In the future, we continue to look at investing in the Central American region because most countries want to be less dependent on thermoelectric generation. We want to have more installed capacity in all markets including Panama, the Caribbean, and we also want to explore the Mexican market,” said Méndez.

Particularly in the Panamanian market, the most attractive and the only one in the region where they do not have a presence, the CMI executive recalls an energy crisis due to demand growth faster than investments, but already in the last five years, several hydroelectric plants have entered the market and a natural gas plant is under construction. Méndez predicts that natural gas will serve as a transition as the industry moves away from hydrocarbon-based generation despite the fact that international oil prices have fallen.

At CMI they see themselves as “long-term investors” with solar and wind sources, pursuing their own developments rather than acquiring other operations. A factor that will help them in their vision is that the great obstacle that was the high costs of renewable technology is history, and that makes projects profitable. For example, five years ago it cost $5 million to produce one megawatt of solar energy and the cost is currently around $1 million.

“The important thing is to lower the cost per kilowatt, such as the success story of Guatemala, where in the last five years, it was reduced by 45% through a more efficient matrix,” emphasizes Bosch.

Another aspect that will leverage investments are partnerships, such as that with AES, which respond to a “transformation in the way business is done” under open schemes of specific associations.

Bósforo is the first project in association with CMI as a capitalist partner, but there are other markets where Corporación AES has assets, and where operations have already taken place.

“Working with regional partners is very positive since we can maximize the benefits of their relationship and gain competitive advantages in financing or demand”, Leonardi stated.

“We want to have more installed capacity in all markets including Panama and the Caribbean, and we want to explore the Mexican market.” (Juan Carlos Méndez, executive president of CMI Energy).