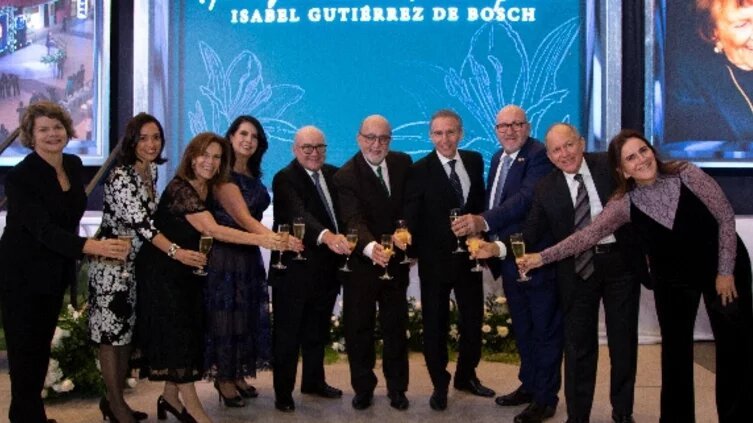 The Universidad del Valle de Guatemala (UVG), has joined in the honors for Doña Isabel. In a posthumous tribute, they commemorated her legacy by attaching her name to a plaza dedicated to her memory in the university’s recently inaugurated Center for Innovation and Technology (CIT).

With the hope of continuing that legacy and keeping it ever-present, Juan Luis Bosch Gutiérrez, Chairman of CMI Capital and son of Doña Isabelita, believes that this new space fully symbolizes the spirit of his mother, as it is a space designed to encourage innovation and entrepreneurship among university students, a goal that she always held.

CIT seeks to be an area dedicated to technology. The building provides students with several laboratories, collaborative classrooms, and a modern library, as well as rooms for conferences and events, among other spaces designed to enhance students’ creativity.

“A place where our students will talk about technology and science. It will have the honor of bearing Doña Isabel’s name,” said UVG Trustee Jorge Eskenasy.

Isabel Gutiérrez de Bosch was always recognized throughout her life as a person passionate about social service and supporting the most vulnerable sectors of society.

Doña Isabel presided over the Fundación Juan Bautista Gutiérrez, the social arm of CMI, since its creation in 1985, and under her leadership, several programs focused on education and health were implemented.

Thanks to this effort, through the foundation, programs focused on education and health were created, among which stand out the Nutrition Program, which graduated more than 500 women in San Cristobal Totonicapán in 2019, and the implementation of its University Scholarship Program, which has provided the opportunity to become a university graduate to more than 182 students since 2000.

Her name and her work have transcended so far, that in 2020, Forbes Magazine chose her as one of the 100 most powerful women in Central America and the Dominican Republic. Among her many achievements and recognitions, she was the first woman president of a Rotary Club in Guatemala and received the Orden del Quetzal for extraordinary merits.

Her participation in social aid and philanthropy also extended to other organizations, such as Fundaniñas, Aldeas Infantiles S.O.S, Asociación del Corazón Infantil (Children’s Heart Association), and to women suffering from cervical cancer through CERVOC.

Thanks to its successful work, the Juan Bautista Gutiérrez Foundation has been linked to several of the Universidad del Valle’s different initiatives, as well as other sectors. Since its founding in 2000, the Foundation’s University Scholarship Program has graduated 182 young people, while 183 are still studying today. Of these, 204 have studied at UVG, 111 of which have graduated with a competitive formation, along with high ethical values.

For that reason, this house of studies does not want to forget Isabel’s work, and with this tribute, wished to highlight the service given to students, her family, society and the country.